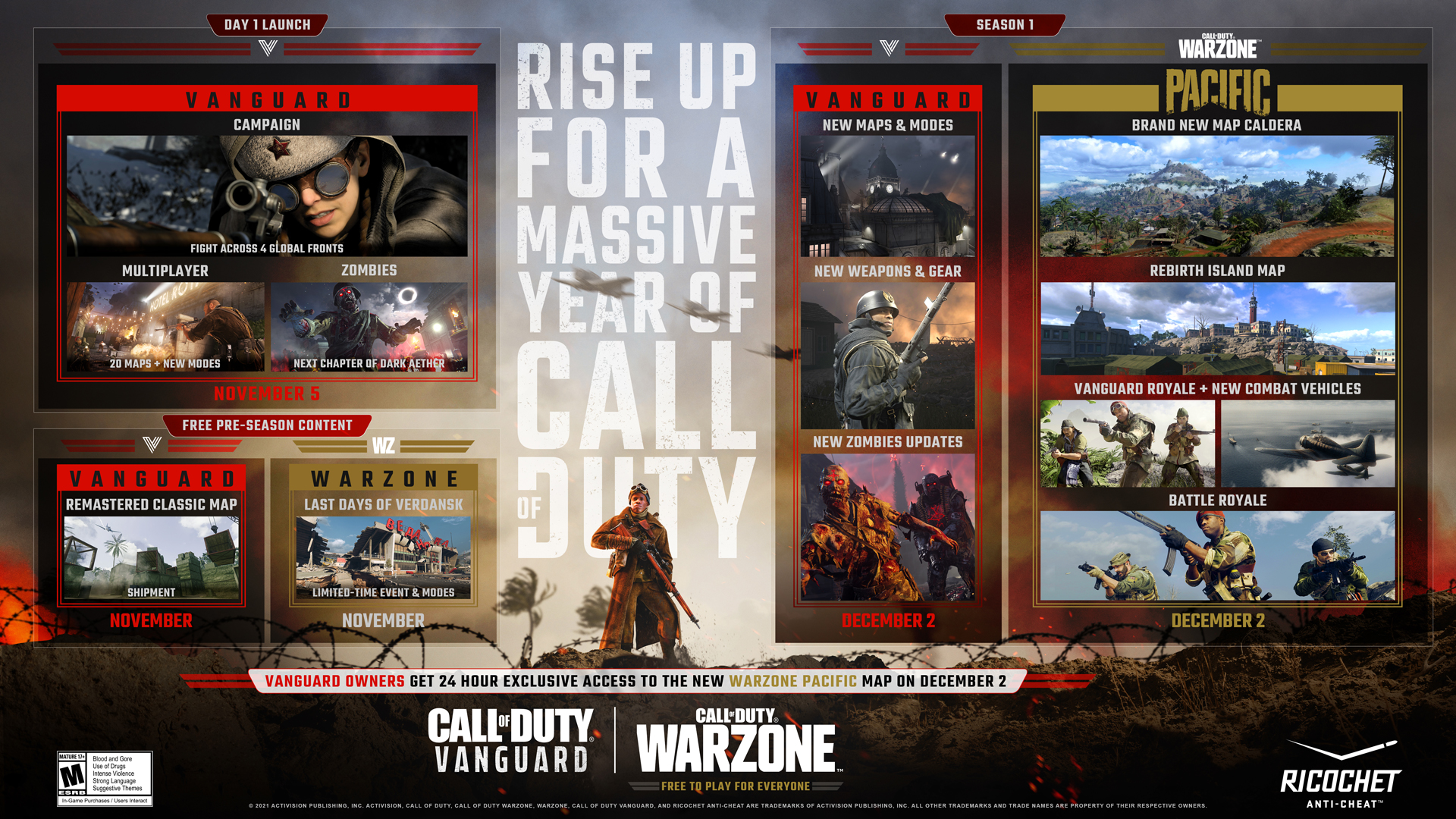 I’ll pull a few snippets from their detailed article on Call of Duty: Vanguard Season One, and Warzone Pacific, then I’ll talk about their new anti-cheat system.

– Vanguard Owners Drop in on December 8. Play the new Pacific map, Caldera, a day early by owning Call of Duty: Vanguard. Rebirth Island will remain live during this time for all other players.

– The Battle Pass: The Best Value Gets Better. Three functional weapons, two Multiplayer Perks, new Equipment in Vanguard, as well as other unprecedented free items in Tiers and dozens of other items in the full Battle Pass.

– Tips of the Three-Pronged Spear. S.O.T.F. Trident is prepared to pierce through the Pacific, with Francis “Kai” Lanakila arriving first with the Season One Battle Pass.

On December 8, Vanguard owners will receive 24 hours of exclusive access to Caldera, the brand-new Warzone Pacific map. During this initial period, all Warzone players will be able to drop into Rebirth Island. After this exclusive period, Caldera becomes accessible to all players, with Rebirth Island returning later in Season One.

To coincide with the world reveal of the new Call of Duty: Warzone Pacific update, Activision released a trailer showing off all the highlights of Caldera…

Call of Duty: Vanguard, after Season One, is being said to feature “Ricochet” anti-cheat. It will be deployed on Call of Duty Warzone at the same time. It will have automatic bans. If you are caught… bye. Bye. And it won’t just be a ban on one game. Across the Call of Duty network of game servers. All games… you will be banned. Don’t believe me? Just read the article here, official from their mouth. Here’s a snippet:

#TeamRICOCHET is preparing for the arrival of the next phase in the RICOCHET Anti-Cheat system, the new PC kernel-level driver. Warzone will be the first title to receive the driver, launching alongside the Pacific update in December. The kernel-level driver, which is one element of the multi-faceted RICOCHET Anti-Cheat system, will be added to Call of Duty: Vanguard at a later date.

Permanent suspensions for security infractions may now apply franchise wide, including Call of Duty: Vanguard as well as any past, present, and future titles in the Call of Duty franchise.

And don’t think for a second that you’ll get away with using racially charged words in the game. This is just the beginning. Rumor is, they’ll apply machine learning to Ricochet. On top of having SBMM (Skill-Based Matchmaking) which is already running in the background of games since Modern Warfare 2019 – which, by the way, already has some form of anti-cheat by detecting players and then putting them into specific lobbies. If you cheat in any game right now, you’ll get into lobbies where cheaters reside.