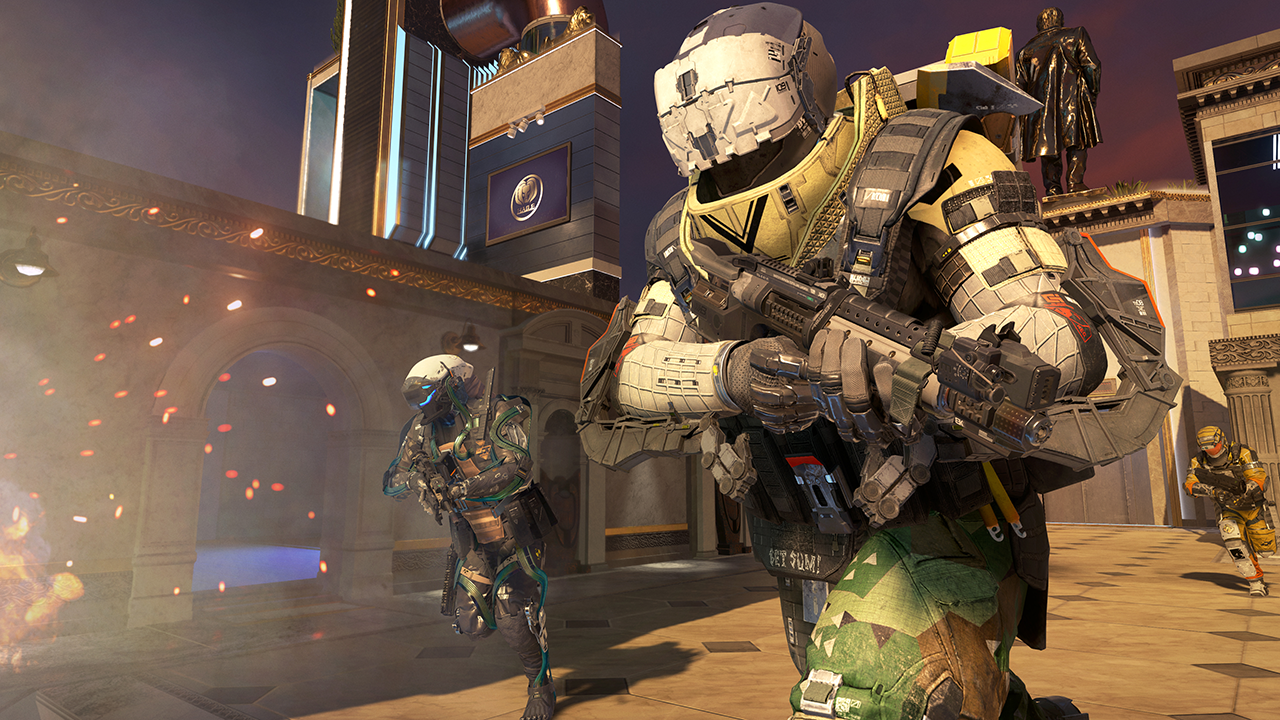 Following the release of the 1st Map Pack, Activision & Infinity Ward revealed the second Downloadable Content (DLC) pack for Infinite Warfare, and it’s called “Continuum.” It will feature 4 maps, and a new Zombies experience. It’ll be available on April 18, 2017 first on PlayStation 4…

Get ready to amp up your Call of Duty: Infinite Warfare experience, because the second DLC map pack, Continuum, will launch first on PlayStation 4, starting on April 18. Continuum will include four new maps, including a reimagined version of the fan favorite Rust from Call of Duty: Modern Warfare 2. Each of these maps feature unique and varied environments to provide a boost to your multiplayer experience, along with the brand-new zombie experience Shaolin Shuffle, a chopsocky zombie adventure set in ‘70s New York and starring Pam Grier.

Excess: Perched atop a gilded penthouse in a sprawling future metropolis, Excess is an intense small, circular map re-imagined from the classic Call of Duty: Modern Warfare 2 map, Rust.

Scrap: Get the drop on enemies from long sightlines or tactical pathways in Scrap, mankind’s final dumping ground on the Moon. You’ll need to keep moving and act fast to survive.

Turista: Turista is a plush spa and resort for the future elite. With sniper perches across a majestic, central waterfall, and tight corners in the hotel for close quarters combat aficionados, the linear three-lane map allows a variety of playstyles.

Willard Wyler’s decade-hopping, genre-spanning zombie experience continues with Shaolin Shuffle. After narrowly escaping the 1980s in Zombies in Spaceland, and the 1990s with Rave in the Redwoods, our four intrepid actor-heroes get time-warped into New York City in the 1970s, only to discover that the inhabitants are walking corpses backed by a disco-tastic soundtrack, complete with special kung fu combat moves which are unique to Shaolin Shuffle.

But you’ll have an epic ally on your side in the form of the legendary actress Pam Grier. Having been imprisoned in Shaolin Shuffle for some time now, the baddest mama jama on the block has patiently honed her martial arts skills and is on a mission to break free of Willard’s eternal grasp. If there is to be any hope for survival or escape she’ll need to teach what she’s mastered to her new cast of students joining the fight.

To do battle with the undead, the returning four cast members will assume 1970s archetypes:

AJ aka the Sleazebag
Fresh from the rave and thrust onto the streets of NYC, AJ is back with a bang and ready to get the hell out of these movies. Decked out with the flyest outfit on the street and a silver tongue to match, our resident bad boy just took bad to a whole new level. With a little luck this is his chance to show Willard he’s a lot more than just a guy with style and good looks.

Andre aka the Street Poet
He’s never been one to shy away from a fight and Andre ain’t about to let that change in the 70s. Making a return to more a familiar locale, 70s NYC is in for the clean-up of a lifetime. The mic and guitar might be gone but don’t let that fool you, he’s more than ready to rock Willard to the grave, ya’ dig?

Poindexter aka the Punk Rocker
From pocket protectors to candy bracelets, Poindexter has been on one hell of a ride. Making his debut as a raging 70s punk rocker in Shaolin Shuffle, he is ready to give his favorite director a big taste of mayhem, one fist at a time. With an all-new rage and a wild enthusiasm for chaos he’s more than ready for his close-up. Anybody in the mood for a little…anarchy?

Sally aka the Disco Chick
Donning an outfit to die for, that sista’ with sass, Sally is back from the 90s and ready to hit the disco dance floor, 70s style! She might have ditched her original gangsta’ vibe but she ain’t about to let up on her zombie stomping ways. She’s saved the last dance for Willard and she’s just got a little something to whisper into his ear. Wanna dance…to death?

Activision and Infinity Ward released a trailer of Continuum…