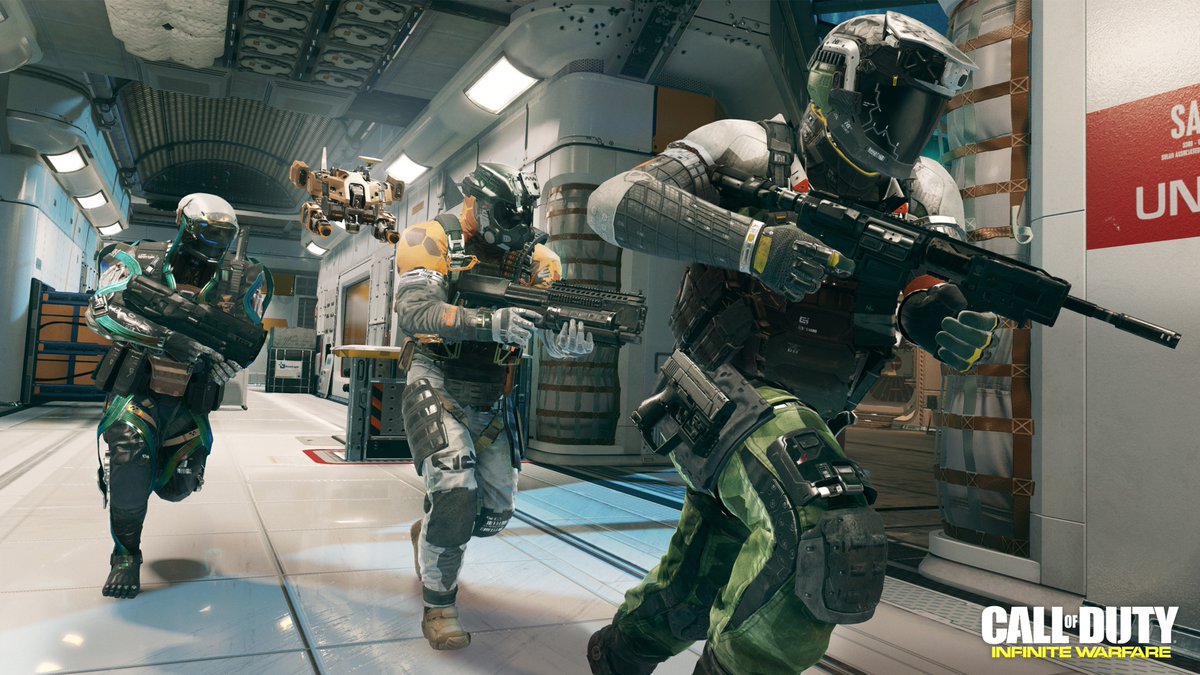 The Call of Duty: Infinite Warfare Beta is still ongoing, and PlayStation 4 players are either enjoying the beta, or not. Either way, the beta brought with it bearing surprises for everyone.

In this announcement, Infinity Ward focused on the actual message and meaning behind the dialogue that comes up when you start the beta: Start ranking up. Infinity Ward is trying to bring focus to the new Supply Drops, which are obtained using Keys or Salvage. Also, the Weapon Crafting system is the main focus here, too. To learn more about Weapons Crafting, check out their Weapons Crafting video…

Prior to Weekend 2, Infinity Ward announced that there are 5 maps in all to play in the Infinite Warfare Beta: Frost, Frontier, Precinct, Throwback, and Terminal. Wait, what’s that at the end? Yep, you could play Terminal in the beta, here’s the trailer for the announcement…

Furthermore, the beta gave us a glimpse into Infinite Warfare’s Mission Teams…

Infinity Ward also announced 4 game modes that will be in Weekend 2 of the Infinite Warfare Beta: Team Deathmatch, Domination, Defender, and Frontline. Shortly thereafter, Infinity Ward announced that anyone playing the IW Beta gets access to this calling card…

Here’s the official message from Activision about that calling card…

After a ton of stress testing last weekend with Call of Duty: Infinite Warfare Beta, we’re diving back in this weekend with even more players. Infinity Ward wanted to maximize the matchmaking and multiplayer data they could take into launch, so the Beta is now open to everyone on the PlayStation 4 and to players who have pre-ordered on the Xbox One as well. Get online and let us know what you think!

Additionally, Infinity Ward is adding a bunch of new content to ratchet the action up even higher. They will be keeping a few surprises up their sleeves to drop throughout the weekend, so make sure you play now through Monday at 10am PDT (5pm GMT) to get the full experience.

We can shed some light on one of those surprises. Anyone who plays the Call of Duty: Infinite Warfare Beta will receive an animated calling card in their inventory when the game launches.

The #IWBeta is NOW OPEN for all PS4 & Xbox One players! Download the Beta and play #InfiniteWarfare now through 10AM PT on Monday, Oct. 24. pic.twitter.com/PzLfmxqojb

We wanted to share some fun stats with you from the first Beta weekend, and we expect these numbers to skyrocket even further this weekend.

– CRAFTING: Nearly 1.8 million weapons were crafted. Save up that Salvage and create your dream weapon! It’s worth noting that you can get Salvage from supply drops, from completing the Mission Team objectives you have highlighted before a match begins, and any duplicate items you may receive which will be automatically burned and converted into Salvage.
– NUKES: 1,407 nukes were activated in the first Beta, rewarding players who have equipped a weapon with the Nuclear perk and accomplished a 25 player killstreak.
– WEAPON OF CHOICE: The NV4 full-auto ballistic rifle was far and away the leading weapon in the first Beta, stacking up a whopping kill count of 77,308,511.

What Rig and loadout will you choose? Jump into the Call of Duty: Infinite Warfare Beta right now and find out! See you on the field, soldier!

Call of Duty: Infinite Warfare arrives to retail stores worldwide on November 4, 2016 for PlayStation 4, Xbox One, and PC. The full Call of Duty: Modern Warfare Remastered experience launches the same day but to get it, you’ll have to buy either Legacy Edition, Legacy Pro Edition, or Digital Deluxe Edition, or Digital Legacy Edition for PlayStation 4, Xbox One, and PC.