It’s an often thankless task nowadays, writing anything positive about Call Of Duty. It’s become so fashionable to hate amongst certain hardcore gamers that you’d almost think it wasn’t the most popular video game franchise in the world. Of course the more casual fans are oblivious to this rebellion, and there’s no sign whatsoever that they’re tiring of the formula. But that doesn’t seem to have stopped Treyarch from changing it anyway.

We’ve seen unusually little of Black Ops II since it was first announced earlier in the year. There’s been some extended glimpses at the single-player campaign and the optional Strike Force missions, but nothing hands-on. It’s only now, at a special event just prior to Gamescom, that we’ve been allowed to play the multiplayer ourselves.

Before our first person shooter skills were publically humiliated there was a lengthy introduction from Treyarch studio head Mark Lamia (with who we have a one-on-one interview scheduled later in the week). He highlighted four main areas of change: the ability to create your own class, score streaks, ranking & unlocks, and eSports.

The latter two couldn’t really be demonstrated hands-on, but eSports in particular was clearly meant to be one of the primary focuses. Although Call Of Duty has long featured many elements of eSports in Black Ops II they’re being embracing head on.

It isn’t a simple matter of just watching other people play the game, but of using a detailed new interface to switch views and maps to follow every aspect of a match. Even this is still a confusing viewing experience though and so CODcasting is being promoted as a key ingredient: the ability to add your own sports style commentary to proceedings. 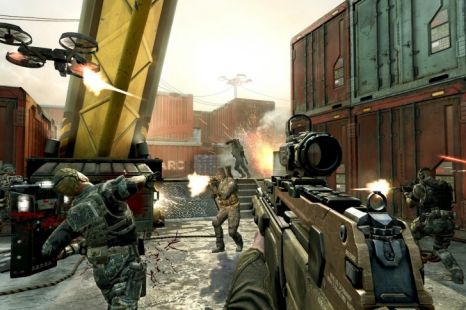 We can only imagine how that’s going to be abused in the future, but for now Treyarch are demonstrating it with one of their own practised in-house commentators. And once he was done a column of women entered the darkened theatre, like monks walking to prayer – iPads glowing in their hands like flickering candles.

Being streamed directly onto them is a Black Ops II match, with Treyarch promising that you don’t need a high end PC to stream your own matches – just a decent upstream bandwidth and an optional USB camera. Whether this means the feature will be available on consoles though they leave annoyingly ambiguous.

They are however adamant that the new concept of League Play will ensure that the eSports concept is kept relevant to all skills of player, not just the super talented.

It’s also revealed that Black Ops II will feature 55 standard levels of experience (which apparently takes a hardcore player only about 24 hours to grind through) and 10 layers of prestige. There is purposefully more content than levels, in an attempt to ensure there’s always a tempting reward around the next corner. There’s also the new concept of medals, which give their own unique rewards such as a boost to the amount of experience you earn.

That’s what we’re shown via video clips and PowerPoint presentations, the rest we get to play for ourselves. 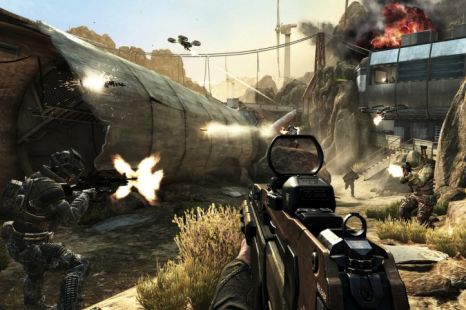 As is already known all of the multiplayer is set in 2025, so until Treyarch change their mind you can’t battle in the ‘80s Cold War era in anywhere but the story campaign. We played on four maps: Aftermath (a devastated Los Angeles after the drone attack featured in one of the story levels), Cargo (adapted from a Strike Force mission in Shanghai, featuring a crane moving storage containers around as mobile cover), Turbine (a large wilderness map, first seen in the multiplayer trailer below), and Yemen (a close quarters map in the streets of a Middle East seaside town.

So how was it all? Well, if you want to complain that it’s just Call Of Duty as normal then nobody can really argue that the basics of movement and combat aren’t exactly the same as always. Even bearing in mind this is only an early preview the animation is often wooden and there’s still essentially no environmental destruction.

The enhanced graphics engine does look noticeably smarter, and a notch more colourful, than before but any argument that it’s a massive step forward is an unconvincing one..

And yet the argument in Black Ops II’s favour is not simply that if it ain’t broke don’t fix it, because the 2025 setting – in particular its weapons and equipment – do genuinely change the nature of the game quite considerably.

We’re only shown a prototype of the Create a Class concept (an even earlier prototype was apparently created as a board game to check it is balanced), where you edit predesigned class types rather than creating and naming them from scratch. At the moment it works by giving you 10 possible attributes you can apply to each class, across several categories: primary weapon, secondary weapon, leathals, tacticals, perks 1 through 3, and wildcards. 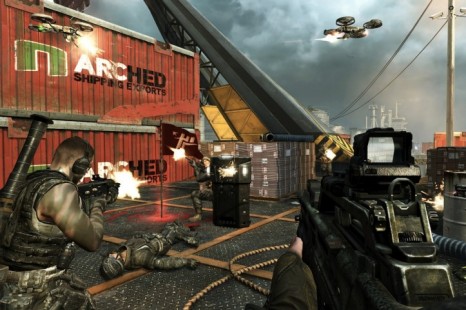 You don’t have to have anything selected in any of the categories but some choices may limit what else you choose that is similar. So, for example, we initially tried customising the Operative class. We picked out a Type 25 assault rifle (fully automatic, high rate of fire but only moderate recoil). We didn’t bother with a secondary weapon and so we had enough points left over to load it up with a bigger magazine, a laser sight, and a millimetre scanner.

This last one is the x-ray style scope that you can see in the multiplayer trailer, that allows you to see through walls up to 25 feet away – as long as the enemy is standing still. You have to be zoomed in for it to work though and we quickly realised it was for more experienced players. So we switched it for a target fighter which lights up enemies with big red symbols so they can’t be missed – perfect for lesser skilled players.

Playing around with the tacticals the concussion grenade was useful and the EMP vital for anyone deploying a lot of robots. Our favourite though was the stock charge, a stick-like device you can throw into the ground or into a wall and will shock an enemy for a few precious seconds – making for an excellent defence when defending enclosed areas.

The sticky Semtex grenade was handy for leathals but the most fun by far is the tomahawk, a one hit kill throwing weapon that you can pick up and reuse.

The perks are just as varied but we went for the Bird Eye (makes you invisible to computer-controlled aircraft and drones), Scavanger (collect ammo from downed enemies), and Extreme Condition (sprint faster). You can switch them all out as soon as you start a new match though and we also tried out things like the self-explanatory Flak Jacket, Toughness (flinch less when shot), and…  we can’t read our hand-writing in our notes for this last one but it involved being able to climb ladders faster.

If all this sounds like too much choice there are some other pre-sets available just before starting a match and we had particular fun with the one based around the new heavy shield. This is not only almost impervious to bullets but you can dig it into the ground and use it as mobile cover – which is also handy for stopping people shooting your legs out from under you. 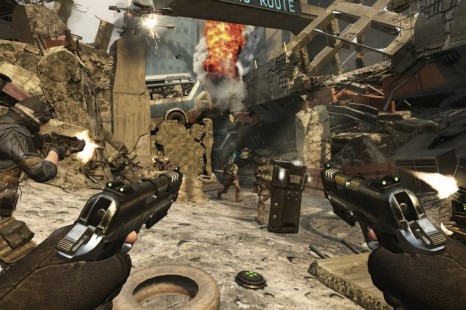 The final part of the puzzle is Score Streaks, which are an abandonment of the original Killstreaks but also subtlety different from Modern Warfare 3’s Pointstreaks. The idea is still roughly the same, in that you’re given points for anything useful you do in the game, whether it’s killing someone, only getting an assist, or something entirely non-lethal like capturing a flag.

Unlike Modern Warfare 3 though the Score Streak always resets when you die. There’s no equivalent of the Support Strike Package that allows you to keep your streak when you die, so building up enough points to unlock the various rewards is a lot harder for the unskilled. This seems to us a backwards step, but speaking unofficially to some of the developers afterwards it seemed as if this could possibly be changed in the final version.

We hope so because the rewards are one of Black Ops II’s real highlights. There are returning ideas like the UAV spy drone and the RC-XD remote-control car bomb but there’s also a giant minigun to swagger around with; a Hunter-Killer drone that you can either let the computer control or direct around manually; the hugely useful Guardian turret which sends out a disorientating microwave (or perhaps soundwave, we never did a get definitive answer on what it was doing); and the A.G.R., a miniature tank that again can be automatically or manually controlled.

There’s the HellStorm missile that can be set to ground or airburst explosions, there’s sentry guns, stealth choppers, orbital satellite weapons, K9 units, a VOTL gunship, and the swarm of kamikaze drones you can see in the trailer. Although many probably could still have worked in a modern setting the near future one has clearly allowed Treyarch to act more imaginatively with the high-tech goodies. 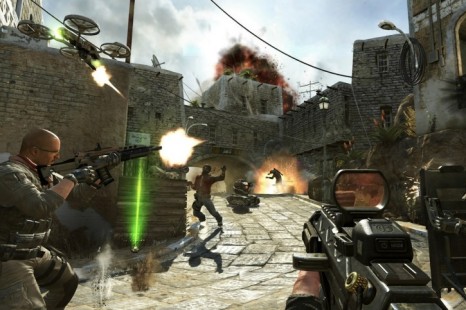 The new game modes are less ingenious but they’re still perfectly welcome. Hardpoint is a King of the Hill variant where you must fight over a randomised area of the map, which keeps moving as the game progresses. Domination is still in there, and one of the other ‘classic’ modes we got to play alongside Team Deathmatch, but Hardpoint is more dynamic and easier to recover from a poor start.

The most interesting new mode though is Multi-Team which allows you to split up into six teams from a maximum of 18 players. Essentially a mix of Modern Warfare 3’s Face Off with one of the standard modes (we played both Team Deathmatch and Hardpoint) it’s a fun way to liven up the other modes and play with a smaller group of friends.

Even though we only managed our usual mid-table mediocrity in most of the matches we thoroughly enjoyed our time with Black Ops II. But then we’ve always found Call Of Duty a game that’s hard to hate, especially if, like us, you don’t have the time to play it religiously every day.

Just as it seems to have benefitted the single-player, the near future setting has opened up a whole range of new features for Call Of Duty, while still allowing it to remain recognisably the same game. How balanced it all is only the final game and considerably more playtime will tell, but every sign so far suggests this could end up as the best the series has ever been.