This is a complete list of the Assault Rifles that will appear in Black Ops 2. This information came from those who got to play the multiplayer at Gamescom:

The AN-94 was developed in Russia. It has been in service since 1997. It has an effective range of up to 700 meters and it can rattle off 600 rounds per minute. This was one of the assault rifles to make an appearance in the multiplayer reveal trailer. If you remember correctly, this gun was used by the player who was firing at enemies via a hole in his Assault Shield. 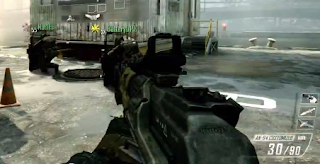 The SMR appeared in a few of the multiplayer videos that were put up on Youtube this week. This doesn’t seem to be based on any real life weapon. Because the game is set in the future, this has given Treyarch the flexibility to create fictional weapons.

This appeared in the trailer reveal. The M8A1 is based on the XM8 assault rifle, which was developed by Heckler & Koch. It’s gas-operated with a rotating bolt and it can fire 750 rounds per minute. In-game, it seems to be a burst-fire / select-fire weapon that shoots 4 rounds per trigger pull. It has low recoil and a reload time of about 3 seconds. 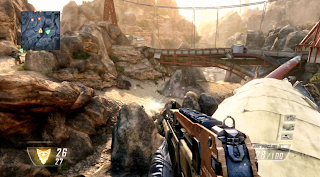 Not to be confused with the Type 95 that appeared in MW3. In Black Ops 2, the Type 25 is an automatic bullpup Assault Rifle. Fun fact: A similar-named weapon also appeared in the Halo series. In-game, it has low recoil and it carries 30 rounds by default. Like many of the other weapons, I have been unable to find a real-life version. 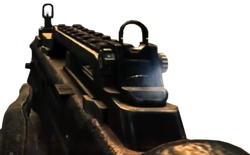 The SA58 is a weapon that is closely related to the FN FAL. The name SA58 is pretty ambiguous though, as there are about 20 or 30 real-life assault weapons that have have a similar name. Here’s a picture of what the SA-58 potentially looks like:

In real life, the Sig 556 is actually a commercial variant of the SG 551 that lacks full-auto capabilities. It was developed in Switzerland and has been in service since 1990. 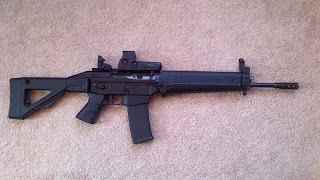 The SCAR-H first appeared in MW2. After seeing the multiplayer footage for Black Ops 2, I think it’s safe to say that it’ll be one of the Assault Rifles in the game. In case you didn’t already know, the H stands for Heavy. In real life, it has been in service since 2009. In previous games, the SCAR-H was a powerful Assault Rifle that had a low rate of fire.

This is a list of the Sniper Rifles that will appear in Black Ops 2. NOTE: These are the only ones that have been confirmed so far. All of this info came from the gameplay footage from Gamescom:

The DSR-50 first appeared in the multiplayer reveal. This is a bolt-action sniper rifle that is described as being “anti-material”. This particular weapon was developed by DSR-Precision in Germany. 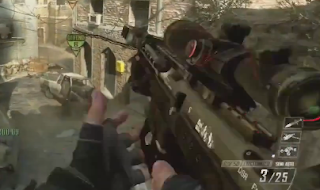 The SVU-AS is Russian in origin and it’s design is mainly based on the Dragunov SVD. Apparently, the “SVU project” began back in the 1970s when the Russian’s decided that they wanted a compact sniper rifle for it’s airborne division. In-game, it acts as a semi-automatic and it seems to handle just like Dragunov did back in the previous Black Ops game. Technical details include “gas operated” and “rotating bolt” design. As you see, it looks pretty lightweight: 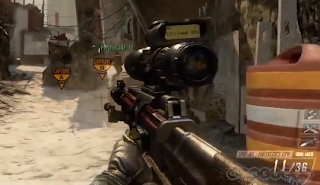 The Ballista also appeared in the multiplayer reveal as well as some of the gameplay footage that was uploaded on Youtube a few days later. The remarkable thing about this sniper rifle is that you don’t need to use a scope on it. You can use the iron sights and still have a weapon that is capable of a one shot kill. In one piece of footage, a guy was using the Ballista with a red laser beam on it. In real life, it’s referred to as the FNH Ballista; a “multi-caliber and modular behemoth” that boasts a “suppressed .338 system”. 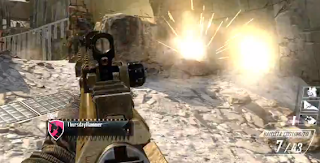 This is a list of SMGs that will appear in the multiplayer for Black Ops 2. Note that this information is legitimate and that it came from those who actually played the game at Gamescom:

It’s official. The MP7 will be returning. This was one of the most powerful SMGs in MW3. In Black Ops 2, it seems as if this gun has an even faster rate of fire than before. This is a German submachine gun that was developed by Heckler & Koch. It has been produced since 2001 and according to it’s Wiki page, it’s basically designed to work like a scaled-down AR.

This one was first shown in the single player campaign mode footage back in June/July. The Chicom CQB is an automatic bullpup SMG that boasts 40 rounds per magazine. It’s important to note that the Chicom doesn’t actually exist in real life (remember, all of this is set in the future). Here’s a screenshot of it being used from a first person view:

The PDW-57 appeared in the multiplayer reveal trailer. During the trailer, you could see that the player was using some sort of special scope that allowed him to see enemy figures through surfaces. So far, I’ve been unable to find any information on real-life variants. In-game, this gun can hold 50 rounds per magazine, which is pretty healthy, to be honest (although the rate of fire is high on this weapon, so it might not make much of a difference): 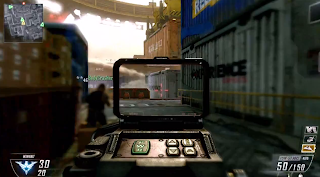 The Skorpion EVO 3 was developed in the Czech Republic. In real life, it’s magazine capacity can hold up to 20 or 30 rounds. Its usage began in Slovakia back in 2002. Other variants of this weapon have appeared in COD games over the years. For example, in the previous game, there was a Skorpian machine pistol. 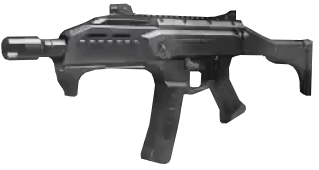 The MSMC was shown during gameplay clips of the multiplayer. This is a real life weapon that is called “The Modern Sub Machine Carbine”. Developed in India, it can fire off 700 rounds per minute. This particular SMG was designed in a way that allowed it be fired with only one hand (like the Uzi). It has a magazine capacity of about 30 rounds. Here’s a screenshot of the gun in question: 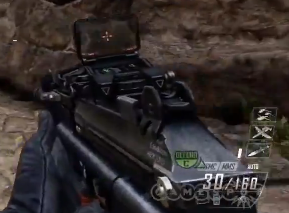 This is a list of the shotguns that will be featured in the Black Ops 2 multiplayer. Note that these are the only shotguns that have been confirmed so far. This information came from the multiplayer trailer and from footage of the gameplay at Gamescom:

The M1216 is an automatic shotgun that holds 16 rounds per magazine. After 4 shots have been fired, your character will cycle to the next chamber and continue on firing. It’s worth noting that this weapon has appeared in other games before; just not in Call of Duty. This particular weapon was made with a compact design: 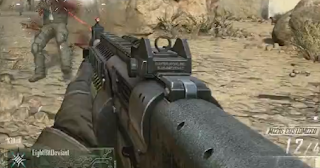 The Seiga 12 is a 12 gauge that was designed in the 1990s in Russia. It is currently produced and manufactured by the arms division of Izhmash. One of the remarkable things about this weapon is that it doesn’t exactly look like a shotgun. Hell, I’d easily mistake it for an SMG or an AR:

I’ve been unable to find any real life information on the R-870 MCS. All I know is that it appeared in the game Combat Arms. In-game, it’s a pump-action that has a 8 shell tubular magazine. Here’s a screenshot of the shotgun being used in Black Ops 2. 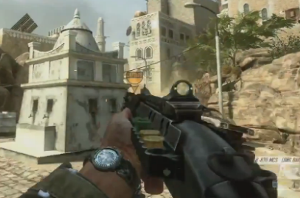 This is a list of the LMGs / Light Machine Guns that will be featured in the Black Ops 2 multiplayer. So far, these are the only ones that have been confirmed as being legitimate. Note that this list does not include weapons found in the single player campaign mode. All of this information came straight from those who got to play the game at Gamescom:

The LSAT LMG was developed in the USA and Germany after the Joint Service Small Arms Program challenged the defence industry to design lighter guns and ammunition. This particular weapon appeared in the Black Ops 2 multiplayer reveal that was released in August, 2012. 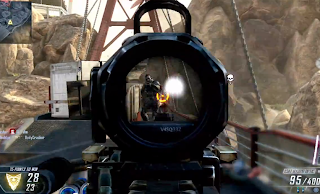 The QBB-LSW was developed in the People’s Republic of China. It has been in services since 1997. It is actually a LMG variant of the Chinese Type 95 family (if you remember correctly, the Type 95 was a burst-fire weapon back in MW3). This weapon normally uses heavy magazine gun cartridges that have long range and some insane power.

The MK 48 boasts 100 rounds per magazine and a full automatic fire rate. Developed in the USA and Beligium, it is currently used by USSOCOM and has been in production since 2003. Although the screenshot below is from the single story, it’s safe to say that the MK 48 look exactly the same in the multiplayer mode. 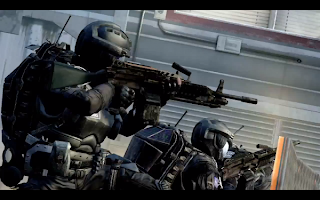 This is a list of all the pistols that will be featured in the Black Ops 2 multiplayer. This information came directly from those who were lucky enough to play the game at Gamescom:

The KAP-40 is a semi-automatic low-recoil handgun that can hold up to 12 rounds in its magazine. This gun was also shown during the single player trailer: 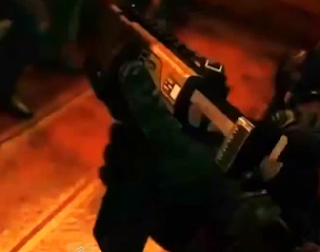 In real life, the Tac-45 is called the FNX-45 Tactical Handgun. Developed for U.S. the Joint Combat Pistol Program. Here’s a photo of what it looks like (we have no in-game footage of it): 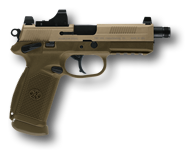 The Raging Judge is huge in real life. Seriously, it’s looks like some sort of mini cannon. Developed by a company called Taurus, this magnum / revolver can actually hold the .454 Casull, which means that it can take down almost anything. In-game, it’s also referred to as The Executioner. It holds 6 rounds and is a semi-automatic. This actually shares the same sound as the Python from the original Black Ops game. 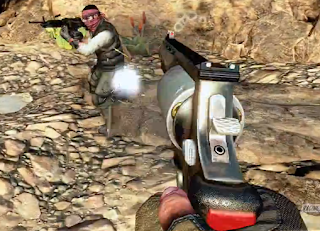 In Black Ops 2, the u23-R will be a 12-round semi-automatic pistol. Unfortunately, I couldn’t find any information on any real life variant, so it looks as if Treyarch just decided to dream this one up (hey, the game is set in the future): 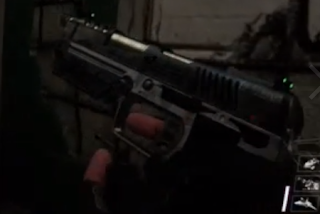 This is a list of the launchers that will appear in the Black Ops 2 multiplayer. Note that this is a confirmed list and that more might be added to it when further information is released:

The SMAW featured in the previous Call of Duty game. It held 1 round and wasn’t really that powerful, to be honest. Compared to the Stinger and the RPG, it comes up second best in almost every way. 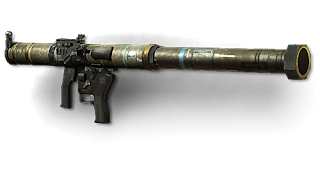 The FJH-18AA appeared in the multiplayer reveal trailer. This is a fictional launcher that seems to be just about as powerful as the Stinger from previous COD games. It comes with two rounds / missiles and uses a lock-on mechanism. During Black Ops 2 footage, you could see the player using a FJH-18AA to take down an enemy Dragonfire. 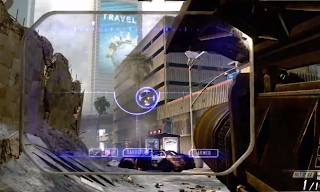