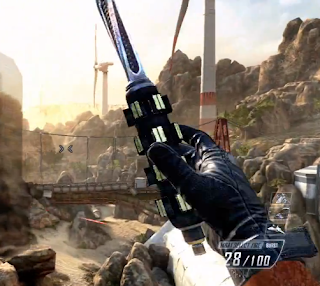 This is referred to as a shock charge (the esports commentator at the end calls them shock charges). These can be thrown at an enemy player, and if they land within a certain radius, they will shock / tase / electrocute the player and prevent him from moving. We’re not sure if these things actually cause damage. Most people are speculating that these are a futuristic replacement for stun grenades. If you watched the multiplayer reveal trailer, you probably noticed how these things stopped two enemy players in their tracks, allowing the player to pick up two easy kills. 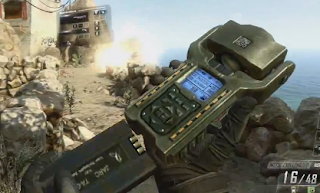 It looks as if the Tactical Insertion will be returning in Black Ops 2. At first, many people thought that this was some sort of remote device that is used to call in killstreaks etc. However, if you pause the game at a certain point (shown in the screenshot above), you’ll see that the player is shoving some sort of battery into the device. On the battery, the words “3arc Tac” are etched into it. In case you’re new to the series: The Tactical Insertion allows the player to choose where he or she will respawn. If you set down a Tactical Insertion on the ground, you’ll respawn at that exact point on the map (unless an enemy player destroys it before you’re killed). These were banned from FFA in the original Black Ops game because they were often used by boosters.

In the screenshot above, you’ll see a very familiar icon. It looks to be a stun, flash or smoke grenade. After hearing from those who attended the multiplayer reveal at Gamescom (and from those who uploaded actual footage of them playing the game), we can rest assured that the Flash, Stun and Smoke grenades will be returning in BO2 (I think we’d all be surprised if they didn’t).

EDIT: Turns out this isn’t a camera spike. It’s actually just an icon for C4 (doesn’t really look like it, does it?). This could be because placeholders and emblems are usually all over the place at this stage in the game’s development (for example, in the multi trailer for MW3, an AC130 icon showed up in the killfeed whenever an IMS killed somebody).

The icon above looks like a camera, which could mean that the camera spike will be returning in Black Ops 2. This hasn’t been confirmed yet, but it is the most likely explanation.

On the 27th of July, Treyarch developer David Vonderhaar responded to a tweet that said: “No more motion sensors please.” Vonderhaar replied by saying “Completely redesigned to be pro-rusher and not pro-camper. Stay tuned.” This means that while the motion sensor is returning; it’s not returning as the defensive-minded piece of equipment that it was in the previous game. The Sensor Grenade will probably give the player a mini-radar/motion sensor once it has been thrown at a spot on the map.

Just like in MW3, the EMP grenade will take down enemy killstreaks and also temporarily disable an enemy players radar if the flash goes off within a close range of him. 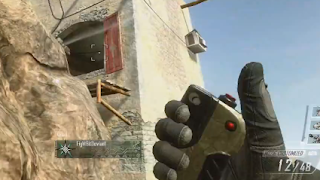 I don’t think anyone was surprised to see the return of C4. This piece of lethal equipment has been featured in many of the previous Call of Duty games. This can be thrown at an enemy and then detonated via a remote device. The C4 tends to more powerful (boasting a wider blast radius) than frag grenades and sticky semtex grenades. This is because C4 is a little more difficult to use. It also doesn’t have the same range as its lethal counterparts.

According to those who played the multiplayer at Gamescom, the claymore will be returning in Black Ops 2. These can be placed at doorways etc and then triggered by an enemy player tripping the sensors. Claymore explosions in Treyarch games don’t have much of a delay, which means that you’ll probably be dead before you realize it… unless you’re using Flak Jacket, of course.

Another piece of lethal equipment that was confirmed at Gamescom. This is a proximity mine that will launch into the air and then explode if an enemy player is unfortunate enough to walk over it. It’s still not clear if you can evade the resulting explosion by lying down prone. Personally, I don’t think going prone should save you, as Bouncing Bettys were incredibly weak in the previous game. Tactical Layout makes it way too easy for people to avoid them.

Confirmed by those who got to play the game early. This lethal grenade can be stuck to surfaces and enemy players. Has less of a range than the frag grenade. It also can’t be cooked for a quicker explosion. 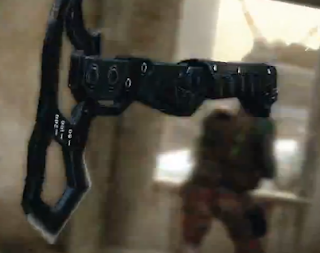 This is being referred to as the “Battle Axe”. It’s a cool piece of equipment that will probably be a lot of fun to use. It can be retrieved after being been thrown, which means that you can use it multiple times, as long as you don’t lose it or get killed. In the screenshot above, you can see that the player managed to crack open an enemy’s skull with one. In one scene, you can see two Battle Axe emblems in the bottom right corner, which means that you can choose two if you feel like taking up two/ten of your optional class slots.

The good ole fashioned Frag Grenade is back. This can be thrown over long distances. It can also be “cooked” so that enemy players have no time to react once you throw it. This has been in the COD series for a very long time and I don’t think we’ll be seeing the end of it anytime soon.