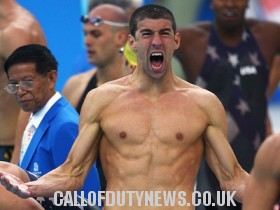 Michael Phelps, the American swimmer and 16-time Olympic medal winner, may be addicted to “Call of Duty.”

The Daily Herald reports that an interview Phelps gave the sports site ThePostGame prompted Liz Woolley, founder of a network for addicted gamers, to warn the Olympian about the dangers he may be facing with his time spent in front of the the screen.

“Any time you get up to more than a couple of hours per day regularly, it can start to interfere with your normal life, your job, your family, your friends and your social life,” Woolley said. “But it can be even more dangerous for people like [Phelps] who are highly driven and competitive, which of course elite athletes and swimmers have to be. The games can be used as an escape from the pressures of training or competition, but it has to be moderated carefully or it can have terrible repercussions.”

Woolley notes that “very high achievers” run a particularly high risk here because they are predisposed to intensely competitive nature. In the original interview, Phelps seems to admit as much when he discusses playing the game online:

via Is Michael Phelps Addicted To “Call Of Duty?” – International Business Times.