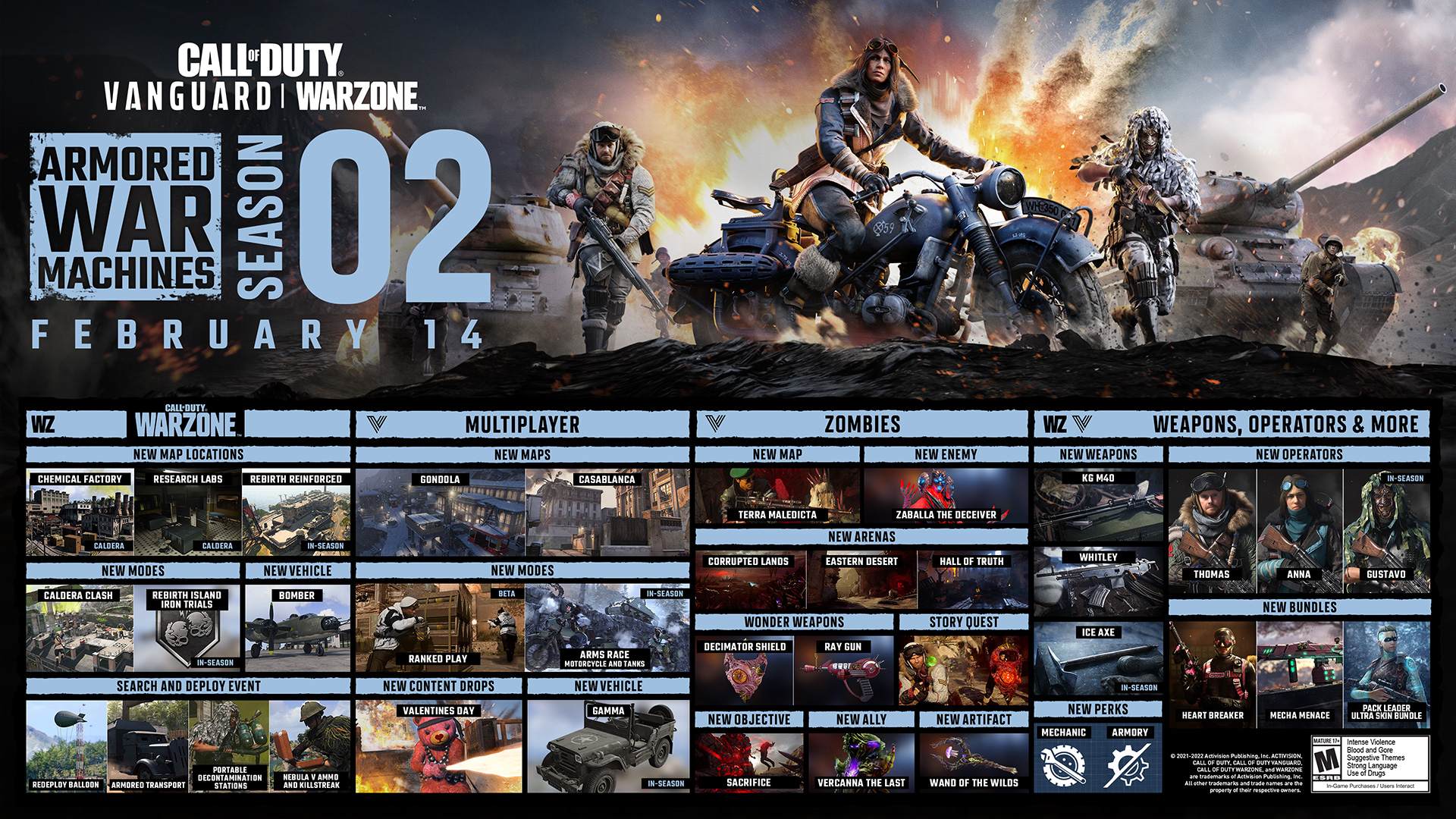 After the release of Call of Duty: Vanguard and Warzone Season One, players were stumped with how poorly released Season One was. They took to Social Media to speak about their displeasure about the update. Developers were on holiday break, but all hell broke loose during Christmas break. So much in fact, the developers returned to work inundated with complaints from the community. In time, they fixed the issues with patch updates. And even delayed Season Two until February 14, 2022.

To coincide with the blog post, Activision released a new cinematic video to YouTube to hype up the release of Season Two of Call of Duty: Vanguard & Warzone…

Activison opened their blog post with a major announcement: Season Two is the season of Armored Machines. So, you’ll be able to use vehicles in certain parts of the new Season Two update. Motorcycles, tanks, armored trucks, and so on….

Get Ready for Armored War Machines

Tilted on its Axis, the world is once again threatened by this resurging nefarious power, one hell-bent on choking the life out of the Allies.

On Caldera, Captain Butcher and company uncover Axis intel on something called “Nebula V.” Among these documents, Butcher not only discovers reported locations of this chemical weapon around the island…

…but also a stockpile of it, located in a hidden stronghold thousands of meters above sea level in the Swiss Alps.

As the squad corner a surviving commander, however, they soon find out just how devastating this weapon can be if released into the world…

Activision further clarified that Season Two will be released on Valentine’s Day (February 14, 2022) and will feature various fixes, quality of life improvements, and other new features…

This is Season Two of Call of Duty: Vanguard and Warzone, where armored war machines and chemical weapons bring global conflict to a new level.

These updates will include various fixes, quality of life updates, and other features that all studios worked on in the lead-up to Season Two. Such improvements will be similar to those leading up to this new season: a recent Vanguard update addressed low visibility issues due to smoke and fire, along with nerfs to shotguns like the Double Barrel (when Akimboed). And as promised, you can expect communications across all lead studios addressing exact changes coming with this update in the week ahead.

In addition to patch notes from Sledgehammer Games and Raven Software, a special broadcast from Treyarch and the Call of Duty League, and other blogs on the Call of Duty website to come over the next few days and weeks, this is what you need to know – for now – about Season Two of Vanguard and Warzone.

Developed by High Moon Studios, Caldera Clash pits two teams of up to 48 Operators (divided into Quads) in a Deathmatch with wild events and power-ups.

An evolution of Clash on Verdansk ’84 — and Warzone Rumble before it — Caldera Clash allows Operators to drop in with their Custom Loadout, which can have any weapons from Call of Duty: Modern Warfare to Vanguard, and a Field Upgrade. Each kill earns their team a point, with the first team to reach a set number of points, or the team that has the most points when the time limit expires, claiming victory for their massive faction.

This mode features three power-ups, Contracts, Buy Stations, the Domination Capture and High Value Target events, and other features from the original Clash, as well as two new events: Double Point zones and Bonus Point crates. These can help a team come back from a kill deficit or run away with victory, but with dozens of Operators per side, the name of the game is keeping that kill-to-death ratio above 1.0.

Featuring its own set of weaponry (from Call of Duty: Black Ops Cold War) and numerous rule changes to increase time-to-kill (TTK), this mode is built for the most hardcore members of our community. However, players of all skill levels who want a change of pace within Warzone should participate!

Those who can’t wait to learn more about this mode needn’t worry: this is a Duos mode — 20 squads of 2, for 40 Operators total — and uses a similar Circle Collapse size and speed. You can read up on the Iron Trials rule set, as well as strategies for surviving match, here.

Claim victory and receive a unique Animated Calling Card, a true sign of mastery over the Iron Trials.

Expect more information to come later this month when these Iron Trials are expected to begin in Warzone.

Deep in the Swiss Alps, Captain Butcher and the three members of Task Force Yeti—Anna Drake, Thomas Bolt, and Gustavo dos Santos—assault a German stronghold in search of a shipment known to them only as Nebula V. He has chosen these elite alpine warriors for their unmatched courage and tenacity along with their intimate knowledge of the difficult terrain.

Deploying in Season Two of Call of Duty: Vanguard and Call of Duty: Warzone, Anna Drake, Thomas Bolt, and Gustavo dos Santos are perfectly suited for the task at hand. Now let’s get to know the cast of Special Operations Task Force 007: Yeti.

As I was writing this article, the gameplay trailer for Season Two was released….