The next Call of Duty title has been confirmed by Activision for a 2016 release and game studio Infinity Ward to develop. What is currently unknown is the game title. Speculations across the internet are between a fourth instalment of the modern warfare series, Modern Warfare 4 and a sequel to the widely considered disappointing Ghosts series, Call of Duty Ghosts 2.

Back in the beginning of January Infinity Ward tweeted they were working on an exciting new game for the CoD franchise which has also led to rumours to a new title all together. This has only increased since Activision released their quarterly results earlier this month and confirmed IW as the 2016 creators.

Games TM February magazine issue has potentially leaked and confirmed the next Infinity Ward game to be “Call of Duty Ghosts 2”. In the magazine issue, it labels Ghosts 2 as one of the most anticipated releases for 2016, along with a release date of November 2016. 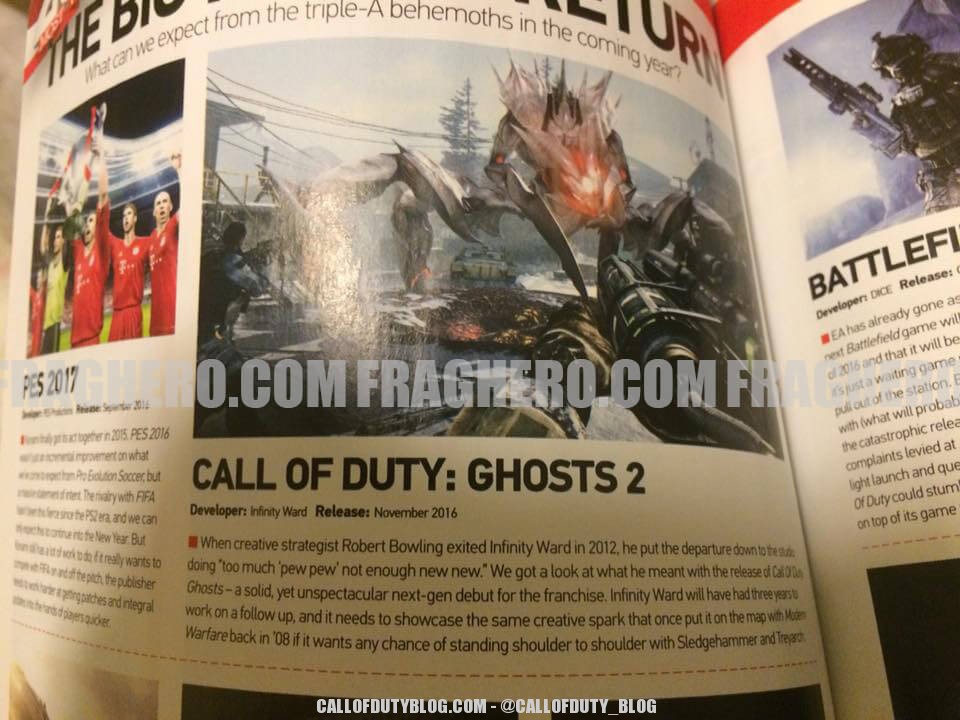 The section of the article:

When creative strategist Robert Bowling exited Infinity Ward in 2012, he put the departure down to the studio doing “too much ‘pew pew’ not enough new new.” We got a look at what he meant with the release of Call of Duty: Ghosts – a solid, yet unspectacular next-gen debut for the franchise. Infinity Ward will have had three years to work on a follow up, and it needs to showcase the same creative spark that once put in on the map with Modern Warfare back in ’08 if it wants any chance of standing shoulder to shoulder with Sledgehammer and Treyarch.

Their is no new imagery or specifics about the game besides the title and with Games TM being an established and reputable magazine it is unclear why this has gone to print and whether not it is a “presumption”.